In my last post I suggested compulsory business education for students in the U.S. I'm not talking about the typical one-semester economics class. I'm suggesting multi-grade basic business courses in both practical application and, in advanced classes, theoretical application. The immediate benefits: employees who understand the basics of business contribute to a better company, and those who branch out as entrepreneurs will have a higher chance of sustaining themselves. What begs for the implementation of this education now is the potential to prepare for and avoid societal collapse that some experts predict lies in the next couple decades. Here's an overview--broken down into bite sizes--of how that might play out.

The History Channel recently aired a two-hour special called, "Prophets of Doom." It might have been more aptly called, "Probability of Societal Upheaval," but that doesn't exactly draw in an audience. Six experts in various fields spelled out a looming disaster that threatens the United States as we know it. Every great civilization historically meets its end, so these men offered their predictions on what might be our own unraveling. The scenarios they described--water shortages, overpopulation, energy shortages, economic collapse, terrorism/nuclear weapons, and the rise of artificial intelligence--have global implications, and any one could trigger all of the others. How would we come up with a strategy to prepare for all of these?

To help with understanding the situations described by the six men in the discussion, I created the following image, a simple visual representation of the balance of tenuous situations threatening our way of life in the near future. (My husband points out it's dimensionally unbalanced; I proposed the blocks have varying masses.) 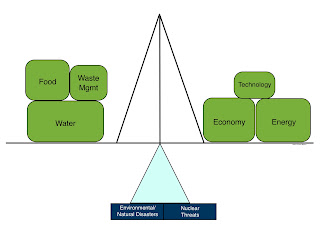 An inability to protect our interests on either side of the scale could dissolve life as we know it. The larger blocks represent our interests exposed to the biggest threats with the smaller blocks being directly tied to the success of their foundations. The two blocks beneath the scale represent issues that we least have the ability to control but that also carry potentially calamitous consequences. Not one of the experts suggested environmental decline, but the effects of any of our myriad environmental issues (drought, pollution, natural resource scarcity . . .) could set in motion other problems on the scale. Any breakdown in these fragile interests, or the actualization of an environmental or nuclear disaster, would disrupt the balance of society and could actually trigger a cluster of disasters leading to complete social meltdown. All have the near-term potential to blow out of control; we live in a unique time where a confluence of tragedy looms if we do not redirect our current course. So as not to sound completely fatalistic, though, I'll have to describe what each issue entails individually, adding to what the men in "Prophets of Doom" propose, and suggest how we might prepare to manage them.

(To be continued. Next entry: The Water Problem)
Posted by Not a Real Blog at 11:13 PM