I'm Not the Only One Thinking about Strip Malls

Yesterday I mentioned driving through an area south of Nashville that was filled with cash advance stores, pawn shops, cell phone stores, and other chains and franchises that fill many small suburbs, especially dense, low-income areas. Today, The Tennessean published an article, "What to do with dead malls, aging suburban corridors?" In it, Ellen Dunham-Jones, a professor of architecture and urban design at Georgia Tech, listed ways in which some cities have retrofitted malls, bulldozed existing structures, and created more welcoming spaces with parks and mixed-use development.

None of these are new ideas, but they point to the trend of increasing enjoyable and beautiful areas outside of the wealthiest areas of town as a benefit to whole cities and communities. My grandmother used to take children from Denver on field trips into the mountains to let them see nature and learn about the area behind their city that they saw but never visited. My grandma explained that many of those kids never even left the city; their parents didn't have cars, and they stayed within their neighborhoods for most of their childhoods. Since I spent most of my childhood outdoors, this always struck me as a tragedy for urban dwellers. That developers and city planners are now seriously considering quality of life for residents in sprawling areas makes me happy, but it also just makes good economic sense (for reasons I mentioned yesterday). 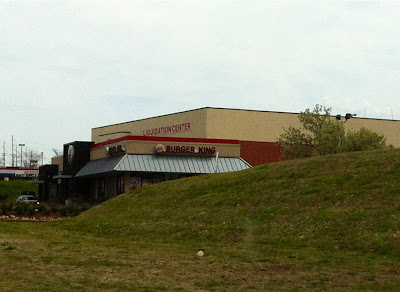 I am not completely pie-eyed, though. This was a view from a stop light yesterday; we thought it was funny because, from this angle, it looks like a Burger King Liquidation Center: "Whoppers, Whoppers Everywhere!" Where would the liquidation center go, though, if not here? Should it be next to a park? The next question becomes, how do we integrate places like this with walkable neighborhoods? Should it be part of an industrial office park sort of space, or could it be like a department store within a larger retail space? While I am thrilled to see us looking at new ways to contain and redevelop sprawl, we also have to remember that certain types of businesses pop up where the rent is low; sprawl sometimes happens because of price, the very thing that keeps some people within an urban core. If we want to make these places livable, we have to develop places that are also affordable.
﻿
Posted by Not a Real Blog at 10:01 AM