For those with five minutes

Excerpted from Part III of Beggars, Barterers, and Bandits posted in September 2011, following a discussion of imminent threats to society: 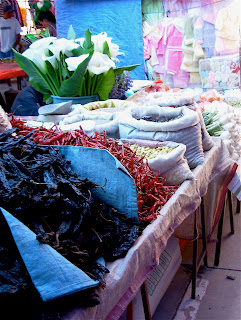 [...] To survive in a time of extreme upheaval when most social systems have been dissolved, we will either become beggars, barterers, or bandits. Those who can be self-sufficient will provide for their own needs as much as possible and will barter for whatever they cannot grow or build. A basic understanding of how to use that bartering system to one's advantage has obvious benefits. Those who cannot support themselves through their own work and ingenuity will either beg or steal, which doesn't sound that much different from now. Keeping the thread of a civil society intact requires that most people become barterers. We can reduce crime and poverty now by preparing people to support themselves and increase local collaboration. Training an entire nation to be better barterers as well as entrepreneurs or corporate titans is time well-spent in a strained educational system. As I've mentioned in a previous post, even people who work to serve, or people who will never start their own business, can benefit from understanding how business works. It is part of a larger picture of national strength-building....


"We are the one species on the planet that will run into a burning fire to save a complete stranger. We are the one species on the planet that will organize our community to help a community on the other side of the world that we may never visit. We're the one species on the planet that has the compassion to make sacrifices to help another species." John Cronin
[...] average Americans can no longer look to large corporations, banks, or the government to be benefactors of opportunity. We must make our own opportunities, creating strength through self-reliance. People often point to the unity felt in the U.S. after the 9/11 attacks as a beacon of hope, as proof that we have the ability to see past the petty issues that often cloud our disagreements. That same unity of purpose arose again after Hurricane Katrina flooded the Gulf states, and Americans quickly realized that the government can be ill-prepared for even the most local of disasters. Business knowledge cultivates self-reliance, which cultivates a stronger, smarter populace, who will resist out-of-control governments, monopolies, or would-be despots. We have it in us now to collaborate and work toward a system where no one will have to go hungry, and we will still have an opportunity to thrive.
Posted by Not a Real Blog at 11:39 PM